Skip to main content
3 NIGHTS OR MORE SAVE 15% OFF

Stay up to date on the best eats and drinks, arts and culture, and things to do in Miami, along with insider tips and local recommendations, as part of our South Beach travel guide. 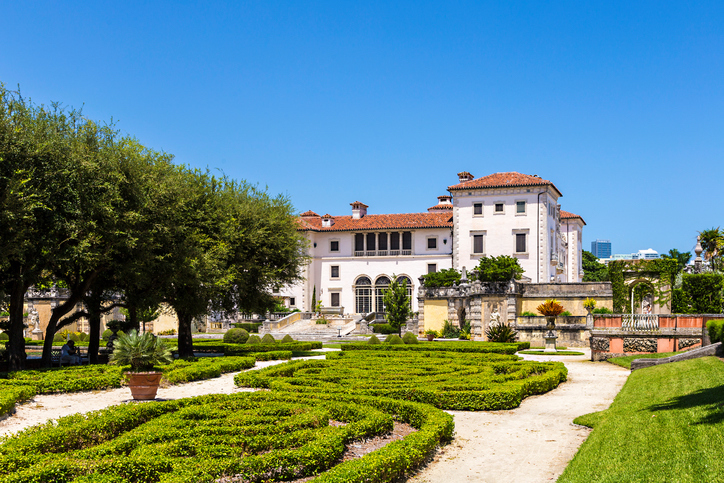 Step Back in Time at Vizcaya Museum & Gardens

Explore Miami’s rich history with a day trip to the Vizcaya Museum & Gardens — the former villa and Renaissance-themed gardens of businessman James Deering. Nestled along the shoreline of Coconut Grove, this lavish estate makes for a picturesque day trip.

Designed by Paul Chaflin and built between 1914 and 1922, the Vizcaya Museum & Gardens spans over 180 acres along the shore's mangroves. Chaflin’s historic European vision of the estate came to life with a French and Italian garden layout, and a villa crafted of Cuban limestone and Floridian coral trim. Deering used Vizcaya as his winter residence until his death in 1925. Ownership was then passed down to his two nieces, and later to the County. In 1994, it was designated a National Historic Landmark and open to the public.

The villa-turned museum portion of the estate contains more than 70 rooms adorned with numerous antiques collected from the 15th to early-19th centuries, including paintings, decorative art, and furnishings. Accredited by the American Alliance of Museums, this villa also boasts an indoor-outdoor pool flanked in fountains and statues.

Vizcaya's villa exterior and garden architecture cite different Italian and French Renaissance inspiration. In addition to subtropic Italy greenery and native Floridian botanicals, the gardens also feature grottos and bridges adorned in shells found in Florida and the Caribbean. Despite damage caused by two devastating hurricanes, the garden’s beauty lives on through over a million dollars in renovations.

The gardens are open to the public from 9:30am – 4:30pm daily, with the exception of Tuesdays, Thanksgiving, and Christmas Day. Tickets cost $18 per adult, and $6 for children, with special exceptions for students and the elderly. You can also purchase an audio tour that leads through the main rooms in the villa, as well as the gardens and grounds. The tour is divided into a 60-minute general overview, with 30 minutes of stops that contain additional information on areas or objects of special interest.

Washington Park Hotel® is committed to providing equal access to its goods, services, and accommodations for individuals with disabilities. Please note that we are currently making accessibility enhancements to our website and are available by telephone at (305) 421-6265 to provide any information or assistance that you may need.